Hollywood spotlight on a beautiful 65' Schooner

This week we are turing the spotlight to a Custom Staysail Schooner which is currently lying San Diego, California.

She was designed by Calle and built by Arthur Pankey at his shipyard, where she launched on Sept 17, 1934. She is 25.9 metres / 85 feet long and has 6 sleeping berths with 2 doubles and 2 singles in 3 cabins.

Literally born of gleaming wood and old Hollywood glamour, 85' Destiny was launched in 1934 for Academy Award winning screenwriter and director Preston Sturges, and named, not just for Lady Destiny, whose siren song calls each and every one of us to become captains of our own fate, but also in memory of his mother, Mary Desti, whose telegraph address was DESTI, N.Y.

Humphrey Bogart captained her as a Transpacific Judges boat in 1936; she was commandeered by the US Navy in what was know as The Hooligan Fleet during WWII (check out the forecastle carvings our Boys in Blue gave her); in 1961 John Wayne chartered her from San Carlos to Hawaii and then on to San Juan Island; and in the '50's she was later owned by Howard Hughes, who secretly married actress Terry Moore aboard the boat. In the 1970's Cheech and Chong's iconic movie "Up in Smoke" was written in Destiny's salon and in 2008, owners Dawn and Mike Hilliard took Destiny to Port Townsend, WA for an extensive refit. 42 months and $1.2 million dollars later, she was completely restored from hull to masts and ready for a new set of adventures.

The present owner has taken Destiny over 6,000 NM, 90% of the time with just two people handling her, since launching her in 2011. From various ports and harbors in Northern British Columbia for the winter of 2012, down the coast of the US.
Her current owners are so proud to have been part of her history and say she sails with grace and style turning heads where ever she puts in to port or harbour.

Also worth noting this beautiful schooner NEVER needs to be plugged into shore power or even go to a dock due to her absolute self sufficient set up, With her state of the art electronics and green technology (wind/solar). She can go months at a time without getting near a marina and with today's economy that is a great advantage. Fuel is generally purchased every 8 - 10 months, depending on passages.

If you are interested in writing the future for this glamorous yacht please contact Boatshed broker Sam who can arrange a viewing. 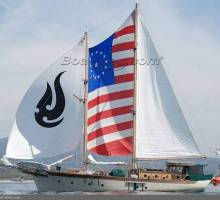 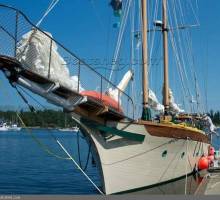 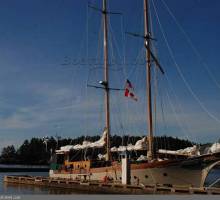 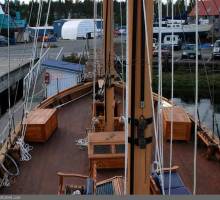